Ontbijtkoek is often on the breakfast table in the Netherlands. More details on Ontbijtkoek and Dutch cuisine and breakfast can tell you much better my friend Johan.

Johan comes from the Netherlands and is therefore the "expert" for today's post.

Breakfast World: "Hello Johan! I am pleased that you are telling me and my followers more about Dutch cuisine and breakfast today. But maybe you would like to introduce yourself briefly first?"

Johan: Hello Christina. I am also very happy to be part of your blog. I am 49 years old, and I was born and raised in the Netherlands, more precisely in Sprundel (which is near Breda). I have been living in Germany since 2000."

Breakfast World: “Wow, it's been so long! What brought you to Germany?"

Johan: “I've been abroad more or less all the time since 1996. I did Work & Travel in Australia, spent some time in South-East Asia and lived and worked in Spain for 2 years. After all, love brought me to Frankfurt and I stayed here."

Breakfast World: “Oh how lovely. That's nice to hear! Johan, I would be interested to know what exactly is the difference between "Holland" and the "Netherlands".

Johan: “Originally, the Netherlands were a republic with different counties. The county of Holland, together with Amsterdam, Rotterdam and The Hague, formed a large and rich trading nation in the 16th and 17th centuries. It attracted attention worldwide under the name of Holland. The present-day Netherlands (officially: Kingdom of the Netherlands) has only existed since 1815. The Netherlands consists of 12 provinces. Two of them are called North and South Holland. To this day, however, the designation Holland has stuck to the Netherlands. I don't know anyone who is offended if you say 'Dutch' to him/her, even if you don't live in one of these provinces. Just like me.”😊

Breakfast World: “Thank you very much for this little excursion! But now, we come to the topic: Dutch cuisine and breakfast."

Johan: “As the Netherlands have always been a trading nation, the cuisine has many international influences. There are typically hearty dishes for the cold and wet season. We also love our soups. But the Dutch also like an Indian Rijsttafel, the Mediterranean or the Caribbean cuisine."

Breakfast World: "Are there one or more national dishes?"

Johan: "Of course I immediately think of Snert and Stamppot . The former is a pea soup, usually with smoked sausage. Stamppot (also called Hutspot ) are mashed potatoes mixed with vegetables such as spinach, cabbage, onions and carrots, optionally also with smoked sausage."

Breakfast World: "Do you have a favorite dish?"

Johan: “From the past I know dishes that combine savory and sweet foods, such as mashed potatoes with white cabbage and minced meat, baked with bananas. And of course I love pancakes, but only the sweet ones: With Stroop (maple syrup) or jam, bananas and Nutella. Pancakes are definitely served as a main meal in the Netherlands. There are even restaurants that specialize in it (so-called Pannenkoekenhuisjes).“

Breakfast World: "What do you typically eat for breakfast in the Netherlands?"

Johan: “Breakfast is very important to us. Usually we take a lot of time for breakfast. There are lots of sweet things like Ontbijtkoek, Eierkoeken and soft rolls (kadetjes) with jam. Of course, peanut butter (pindakaas) shouldn't be missing either. "

Breakfast World: "And what do you have on your breakfast table in the morning?"

Johan: “I always bring enough pindakaas and Hagelslag (chocolate sprinkles in all sorts and colors!) from the Netherlands to Germany.

Thanks God, for some time now, German supermarkets have been selling Chocomel , a very creamy chocolate milk that I really love for breakfast."

Breakfast World: “What exactly is Ontbijtkoek? And what is the difference between Ontbijtkoek and Peperkoek?“

Johan: „Ontbijtkoek means breakfast cake. It is a collective term for the many types and regional variations of breakfast cake. Peperkoek is one of them. It used to be baked a lot in Flanders. Pepper (Peper) was then part of the cake. Since pepper was very expensive, it was highlighted in the name. In the Netherlands we use both names, in the north it is more like Ontbijtkoek and in the south Peperkoek.“

Breakfast World: “What do you eat with Ontbijtkoek? Pure it seems a bit dry to me."

Johan: “You can smear butter on it to make it a little ,smeuïg' (creamy). But a good and freshly made Ontbijtkoek is not too dry. It tastes wonderful with coffee or Chocomel for breakfast!"

Breakfast World: "Now, of course, I would be interested in whether you have baked Ontbijtkoek yourself?" 🙂

Johan: "No, I always left that to our local baker, he can do it better!" 🙂

Breakfast World: “Thank you very much! It's a very interesting excursion into Dutch food culture! Now I really feel like traveling to the Netherlands and, of course, I could really go for Ontbijtkoek.“

I hope, you also fancy a Dutch breakfast with Ontbijtkoekjust right now. Thus, here is the recipe.

Have fun baking and of course: 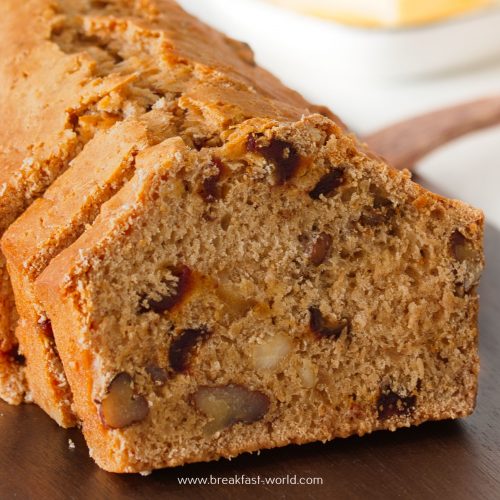 Various ingredients such as small pieces of rock candy, nuts or dried fruits can be added as desired. The above mentionned optional ingredients resulted of my leftovers that had to go.