Chapati is a thin, soft and very tasty flatbread. I know it India. During my research, however, I discovered that Chapati are also often served for breakfast in Tanzania.

Unfortunately, I've never been to Tanzania. But after my research regarding typical cuisine and breakfast in Tanzania, I have definitely put the country on my list of countries that I would like to visit in the near future! I hope my following post also makes you fancy traveling to Tanzania.

The cuisine in Tanzania

Tanzania is located in East Africa and borders the Indian Ocean. The cuisine is not particularly diverse. However, thanks to fresh tropical ingredients as well as Indian and oriental influences, it is very tasty.

Upcountry, people tend to eat heavier dishes and more meat (mostly chicken or goat) as oposed to the coast. In any case, meat can more or less only be afforded by the rich or those who keep animals themselves. There is hardly any pork because many of the habitants are Muslim. Moreover, pork is not particularly widespread among Christians either.

The coastal region and the island of Zanzibar offer a rich selection of fresh fish and seafood. Rice seasoned with cinnamon, curry, or cloves is often served.

They grow splendidly around Kilimanjaro, so that they are an integral part of the menu. It is said that there are around 20 different types of bananas in Tanzania.

They are roasted, fried, deep-fried, grilled or eaten as a porridge. A stew with green bananas tastes particularly good..

The national dish is called Ugali. This is a solid maize porridge, which is prepared with corn being pounded with a mortar with salt and a little water. Then the mass is boiled for about half an hour until a thick paste is formed.

It tastes pretty bland on its own, but makes your stomac full. With a suitable side dish (e.g. spicy vegetables, meat and sauces), however, Ugali is really delicious. In some regions, Ugali is also served with soured milk as a meal.

Ugali is inexpensive and many locals - poor or rich, young or old - refer to Ugali as their favorite dish. In Tanzania people say: Eat Ugali, and you will be strong.

Ugali also serves as a substitute for cutlery: You cut off a piece of the corn porridge with your right hand and form a ball from it. Then, you press a small hole in the middle of the ball. Now you can use the ball like a small spoon and scoop up meat, vegetables or sauce with it.

By the way, Ugali can be found in many African countries. It is named differently from country to country, e.g. Fufu in West Africa, Pap in South Africa or Matoke in Uganda. Depending on the country or region, millet, cassava, potatoes or plantains are used instead of corn to prepare this cereal porridge.

Breakfast in Tanzania is quite simple. People drink a cup of tea (chai) with milk and sugar and eat white bread with butter.

Every now and then a hard-boiled egg, fried egg, sausage or French toast is served. In some families, potatoes or sweet potatoes are also occasionally eaten for breakfast.

Instead of white bread, Mandazi, Uji and Chapati are also very popular:

Mandazi are sweet small fried balls similar to donuts. Especially children are fond of them. Mandazi are often sold as street food at many street stalls and are the perfect snack between meals. The dough consists of flour, coconut milk, eggs and yeast. They get their typical taste from a light note of cardamom, ginger and cinnamon. Mandazis remind me of Babakau from Fiji. Do you remember the recipe in my post about breakfast in Fiji? You can find it here.

Sometimes Uji is eaten for breakfast in Tanzania. Uji is a kind of porridge made from cornmeal, water, milk and a little sugar. The consistency is similar to semolina pudding. Uji can also be made with millet and wheat.

Due to its pulpy consistency, Uji is particularly suitable for babies and children. But adults who - like me - like to eat porridge and muesli for breakfast might also love Uji. I like to add a few dashes of lemon juice and a pinch of ginger and cardamom powder into my Uji. In addition, I serve a compote made from tropical fruits such as mango, pineapple and papaya. A few threads of saffron make my Uji perfect!

My favorite is Chapati. This is a soft, thin flatbread made from flour, water and oil. Originally Chapati come from India. But they are also an integral part of the menu in Tanzania and East Africa. Chapati are actually eaten everywhere and all day long, not just for breakfast.

Chapati are so wonderfully soft because the dough is brushed with oil, rolled and wrapped several times.

This gives the Chapati several fluffy layers that can be easily torn apart. The consistency is somewhat reminiscent of puff pastry. Brushing with oil prevents the Chapati from drying out quickly.

The process sounds more complicated than it is, but it's worth the effort. Because nothing beats a homemade, warm, fresh and fragrant Chapati.

I especially like Chapati with a little butter and a pinch of salt.

At least as delicious taste Chapati with hummus. You can find a quick and easy recipe for hummus in my post on breakfast in Oman, here.

Of course Chapati is also a perfect accompaniment to a curry.

But the sweet version tastes great as well: Just spread on your Chapati cream cheese, honey, jam or Nutella and top it with a few slices of banana.

Well, I hope I've made your mouth watery now. And here comes the recipe:

Good luck with your baking! 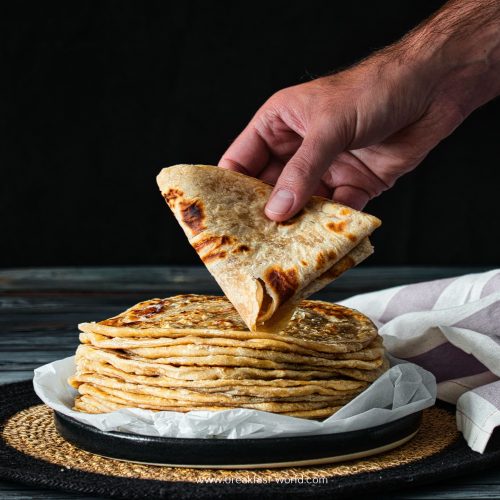 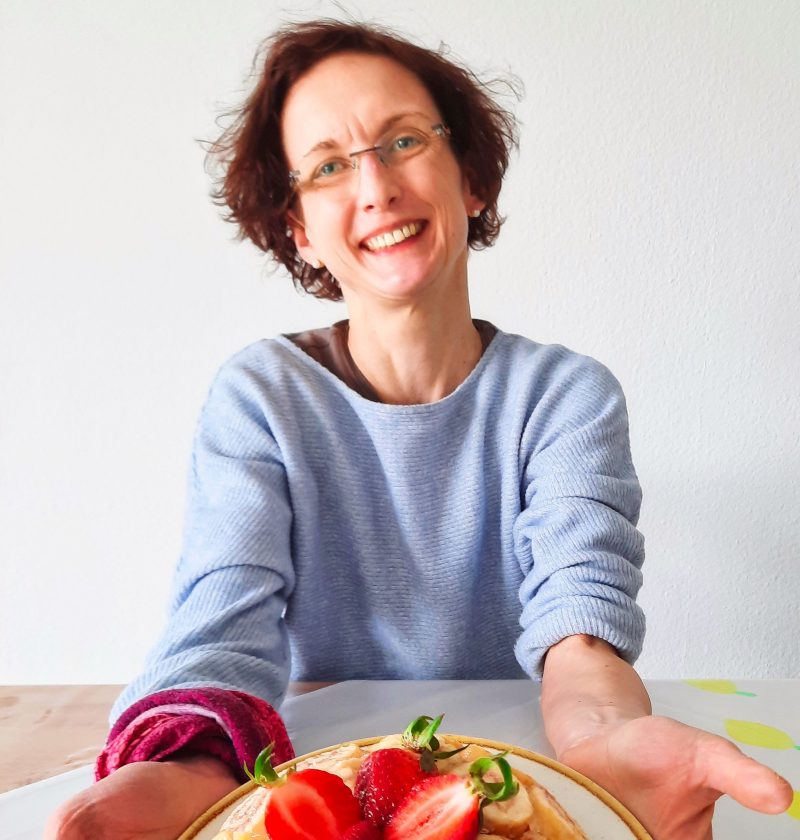